Comercial Naval Canaria has visited the TECHTOP stand at the 29th Biennial International Machine-Tool Exhibition (29BIEMH) celebrated in Bilbao, Spain. The third most important exhibition of Europe in this sector.

TECHTOP – Dimotor, is taking part for the first time in the 29BIEMH, celebrated from the 30th of May to the 4th of June where their wide catalogue of motors and various new proposals are exhibited to supply the increasing demand of the sector in various application fields.

TECHTOP displays their new serie of motors for marine environments with GL (Germanisher Lloyd) certification and a VPI (Vacuum Pressure Impregnation) polish protected winding, in addition to the anti-salt and anti-mould coating, steel fan and other features that make these appropriate for marine applications in pumps, hydraulic units, compressors, hoists, etc. 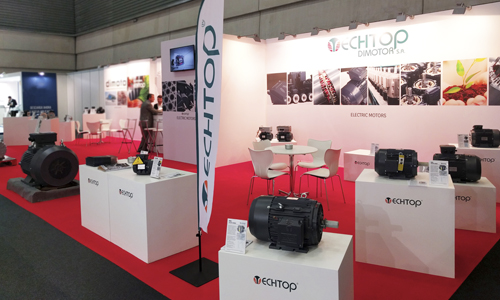 Comercial Naval Canaria now has available in stock MGM selfbraking three phase motors exhibited at the TECHTOP stand of the 29BIEMH. The selfbraking asynchronous motors have a stopping device that operates when power source lacks. Providing not only a precise stop, but also security when it comes to an involuntary interruption of the current supply. Therefore, it is indicated for uses such as transfer machinery, textile, ceramic and packaging industries.

These general conditions will be valid for all operations arranged with COMERCIAL NAVAL CANARIA, S.L. and regulate the contracts for the sale of the Products or part of them.